In an era before producers established censorship guidelines, anything went in Hollywood, including films starring hyper-sexualized toddlers pretending to be prostitutes, drunks, and disparaged veterans.

The familiar cherubic face of the one and only Shirley Temple has captivated the hearts and imaginations of Americans for well over 80 years. With her trademark curly hair and natural charisma that earned her specifically tailored roles, Temple was, and perhaps still is, the quintessential child star.

Yet Shirley Temple’s Hollywood origins are perhaps seedier than many would ever know, particularly when held up to a modern standard. Temple herself would later refer to this first gig as “a cynical exploitation of our childish innocence,” but even she may also have to concede that without it, she may never have become a superstar.

This is the strange and unseemly story of Shirley Temple’s earliest role — in the Baby Burlesks.

In 1932, at the age of three, Shirley Temple signed a contract with Educational Pictures, a film distribution company founded in 1916 known primarily for brief comedies.

As film was still in its infancy as both an artistic medium and a business, rights, and protections for actors — and specifically child actors — had not yet been created. This was also during a time in Hollywood known as the Pre-Code Era. The Hays Code, so-named for the 1934 president of the Motion Picture Producers and Distributors of America (MPPDA) William H. Hays, established a set of censorship guidelines for movie production based deeply in a conservative Catholic temperament.

Before this code, however, Hollywood writers and producers had the freedom to film basically whatever they wanted.

Enter the Baby Burlesks — a series of comedic shorts that featured a cast of toddlers performing satires of major Hollywood films and current events. Though the film appears to be a seemingly innocuous concept upon first discovery, the Baby Burlesks were anything but.

The eight short films saw toddler stars dressed in hyper-sexualized adult clothing. Beneath that, they donned oversized diapers clasped with a safety pin. The costuming alone in these films are enough to raise eyebrows. When viewed through the lens of a modern movie-goer, it seems nearly impossible to glean where the comedy in these shorts actually is.

However, in an era where audiences were still easily pleased by the novelty of film, the Baby Burlesks likely seemed charming.

In the short “Polly Tix in Washington,” a four-year-old Shirley Temple is seen playing what is insinuated as a prostitute. Sent to “entertain” a senator (played by a fellow child-actor), Temple can be seen wearing a small bra while filing her nails in a manner meant to mimic the actions of a self-assured and perhaps world-weary mistress lounging in her boudoir.

Temple later enters the office of the senator draped in pearls, sashaying into the room with her hands resting firmly on her hips in a disturbing display of mock adult sexuality.

Temple then wraps her arms around the senator’s neck and plants two clumsy kisses on his lips. Of course, the sexual implications are lost on the children who appear in the film, children who were simply following the direction of the adults controlling them, namely, the film’s director and he who discovered Shirley Temple, Charles Lamont.

Lamont also directed another one of the total eight burlesques, entitled “War Babies,” which served as a spoof of the World War I era silent film, What Price Glory?.

The short once again featured Shirley Temple in the role of a prostitute, this time vying for the affections of army men, played of course by 3 – 5-year-old boys. Within the first minute of the film, Temple is seen in a purposely loose-fitting top that slips and falls down revealing her shoulders as she performs a caricature of a seductive dance.

She later trades kisses for lollipops, is repeatedly called “baby,” refers to an army man as mon cher Capitan, and even refers to herself as “expensive.”

The humor of the piece is once again intended to be derived from watching toddler-aged children unknowingly copy the behavior of fully grown adults, but it was perhaps also all to the detriment of the children themselves whose innocence was taken advantage of.

Unfortunately, the overtly sexual overtones that Shirley Temple and her fellow child-stars were forced to mimic over the course of Baby Burlesk wasn’t even the worst of it. Without regulations regarding on-set safety for actors, directors were able to employ various means of cruel and unusual punishment to maintain order on set during filming. 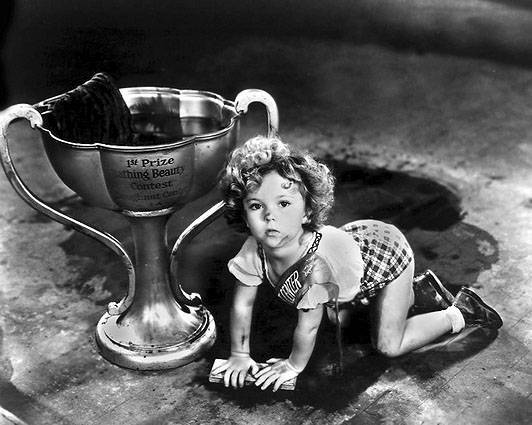 The Death Of Virginia Rappe And The Trial Of Fatty...

33 Japan Facts That Reveal The Truth About Samurai, Geisha,...
Back to
log in
×